SolarMio > Questions > How Bright is 10 Lumens?

How Bright is 10 Lumens? 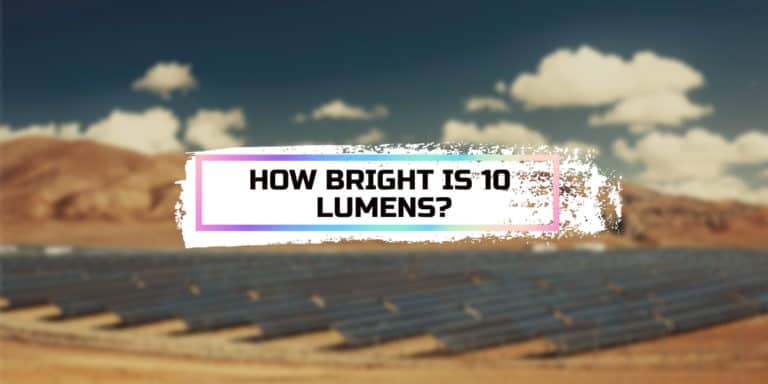 When you are out to get lightbulbs, one of the top criteria you look out for (if not the most important) is the amount of brightness they offer. By doing so, you can tell from an array of lightbulbs stacked on the store shelf which are most suitable for you. Different levels of brightness are needed to serve multiple purposes: from aesthetics, indoor or outdoor lighting purposes, halls and events lighting and lots more. Information about this also helps you compare different bulbs. You find this written on the product pack by manufacturers to help guide users.

Most electrical appliances, including light bulbs, are measured in Watts(W). The wattage measurement system tells you how much energy an electrical device draws from a power source. A flashlight rated 100W uses that much energy (power) to function. This information, however, is not adequate. The commonly used incandescent light bulbs provide heat and the 100W rating accounts for that too. Long story short, we do not know exactly how bright the light produced is. All we know is that it would operate at optimum performance when it draws the stated amount of Watts from the power source. It is in these scenarios that the lumens measurement system comes in very handy.

Lumens is a measure of brightness or the amount of visible light output. It tells you how much brightness of light you can get from a light source and provides more relevant information for users. For wattage metric, the higher the rating, the more energy is being used. The science behind this is that if a light bulb would use up more energy, it should be brighter. However, associating power consumption with light output is an inaccurate correlation. Take low LED lamps as an example. Their design is such that they consume lesser power but produce more light output. Do you see what I mean? But with lumens, a higher rating means more brightness. Because it is more direct and precise with measuring light output, it provides better information to make lighting decisions.

You can check out this video to understand this.

Conversion From Lumens To Watts

We have established that the relationship between watts and lumens is not a direct one. As a result, conversion between both units is a tricky one. However, there are some parallels used to approximate the relationship between both metrics. One of such is luminous efficacy. Luminous efficacy is a measure of how well a light source converts energy (watts) to light (lumens). LEDs have better ratings than incandescent bulbs (this means bulbs that produce heat, so do not get confused here, alright?), about four times more efficient.

The table above offers clarity and puts a lot into perspective. As you can deduce from it, LEDs require fewer watts compared to incandescent bulbs to give out the same amount of brightness. Also, the relationship between lumens and watts is not a direct one, even though there are estimated values and parallels which guide conversions.

How Bright is 10 Lumens?

Now that you have gotten a grasp of the basics, we can go a step further. First off, how bright is 1 lumen?

For starters, one unit of a lumen is bright enough for you to see it in a very dark room and find your way around it. It is even sufficient for use to glance through a book provided the book is within one foot of the light source.

10 lumens is about the same brightness produced by a candle. Candles illuminate 360° (that is around a room or space), so for you to see how bright 10 lumens is, picture this amount of light focused through a flashlight beam or walkway light source.

The light output is quite bright and is suitable for use in pitch-dark rooms. As you go towards much brighter areas, you would need more lumens. You could use it as your backyard light to guide you to the main building or a walkway light leading to the major road as it would fade in the presence of street lamps.

This amount of brightness is also suitable for:

To utilise 10 lumens maximally, the beam of the flashlight or light source should not be a wide one. The reason for this is to guarantee more intensity (which translates to more brightness). Wider beams are more suited for coverage while narrow ones for light intensity. For 10 lumens brightness, the light intensity is of greater priority than the light coverage. With more lumens, you can achieve more coverage with increased luminous intensity.