SolarMio > Questions > How Many Lumens is The Sun?

How Many Lumens is The Sun? 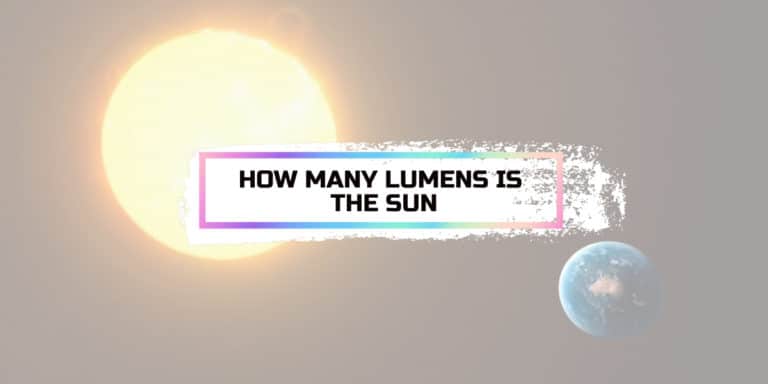 Before getting into details of how many lumens is the sun, I want to explain how the sun produces light. The sun has two main elements of hydrogen and helium. A nuclear reaction called fusion occurs every time in the sun. This atomic reaction happens due to a combination of hydrogen atoms to form helium. With this reaction, a massive amount of heat and light is produced. The sunlight is a composition of all seven colors of the rainbow, though it appears white.

How Many Lumens is The Sun?

On the other hand, the light energy reaching the earth's surface is about 1000 watts per square meter. If you multiply both of these values, you can find the lumens in the sunlight, which is about to be 98000 lumens per square meter.

As the sunlight intensity decreases, the solar panel current starts falling, ultimately reducing the power generated. You can use different solar tracking techniques to track the position of the sun.

You can track the sun movement in the sky throughout the day in different configurations based on the system's size and budget allocated. The most well-known and cheapest technique is single-axis solar tracking, where you track the sun on a single axis only. You have to install the solar panels at an angle to the tracking structure, which rotates around a fixed point and faces the sun during the daytime. This technique is suitable for large systems where solar panels are installed in long rows.

There are regions in the United States and worldwide where the most time of the year remains shadowed with the clouds. Due to this reason, sufficient sunlight cannot reach the earth's surface for better performance of the solar panels. It becomes difficult to recover the money invested instead of getting any profit from the system.

If you live in such an area, I will suggest you not to invest in a solar photovoltaic system, instead use the electricity from the power grid.

Sunlight reaching the earth's surface is vital for the solar energy system to work efficiently and give you a benefit from it. Many websites and software offer a service where you add your location information like latitude, longitude, or zip code. In return, you get information about the annual sun hours, optimum tilt angles, and expected time of getting your investment recovered. I will suggest you do all these analyses during the planning phase. If you do not have enough expertise to do it yourself, you can hire a solar panel installation for their services.