SolarMio > Questions > How Much Does a Solar Panel Weigh?

How Much Does a Solar Panel Weigh? 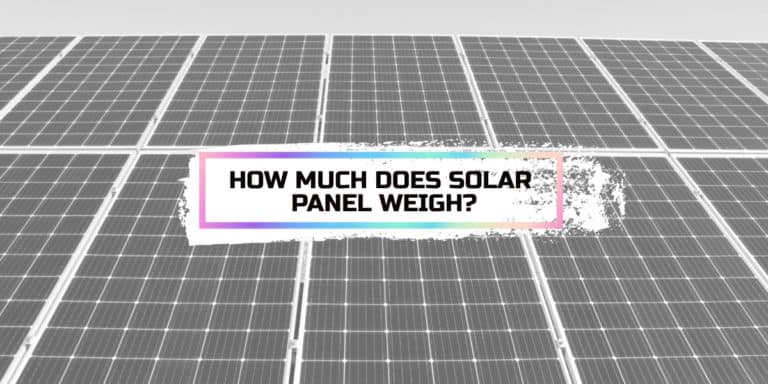 As more and more houses have been moving to the solar energy ecosystem. The installation and usage of solar panels have taken a huge jump. In this regard, a lot of people have complained about getting roof leaks in their houses. These roof leaks are triggered due to several factors. Sometimes, they could also be caused due to the type of roof.

The issue of the weight of solar panels is usually not there when you are mounting them into the ground, but the weight factor should always be considered when the installation is on a rooftop.

So further in the article, let us take a look into how much does a solar panel weighs? And why is it important?

The actual weight of a solar panel

Just to put things in perspective, a solar panel can weigh somewhere from 30 pounds to 50 pounds depending on the materials used during the manufacturing process. The glass used in the solar panel adds the major weight to the solar panel, otherwise, the solar cells used are really lightweight.

Distribution of a solar panel

To know what makes up the total weight of a solar panel, it is essential to learn all the materials that are involved in making up the complete assembly of a solar panel.

There are a lot of glass and thin sheets involved in a solar panel. The sheets are of two different types, one is an EVA ( ethylene vinyl acetate ) sheet and the other are polyvinyl fluoride sheets. Solar cells are sandwiched between these two types of sheets and the glass.

Types of solar panels and their weights

There are many variations of solar panels, and the weights of each of these variations differ from each other. So to get a clear picture of all these different types of panels and their weights, you can read about them, below.

Monocrystalline solar panels are the most efficient kind of solar panels to be found right now. The primary reason for their high efficiency is that they are cut from a single source of silicon. These solar panels also cost the highest.

Usually, roofs are capable of holding much more weight than what solar panels weigh. But, this is not the case with every roof. Some roofs are old and weak and can't hold the weight of solar panels. The same is the case with dated metal roofs, they catch rust which makes them feeble and thus they succumb to the heavyweight of the solar panels.

The best advice that I have for you if you also have an old and weakened roof is that you should get it looked at by a solar installation expert. An expert would give you their opinion of whether your roof will be able to withstand the solar panel sheet. If the solar panel installing expert is skeptical about it, then you should surely not install any heavy-duty solar panels on your roof. One thing that you can do in this situation is that if there is a possibility, installing solar panels on the ground might be a better option. However, since most houses do not have a front area or backyard that big, the chances of using this idea are pretty thin. What you can instead do here is that first get the roof repaired and strengthened out, then install solar panels so there are no chances of any roof damage.

An alternative to repairing old roofs

It certainly is not possible for everyone to get their roofs fixed before moving to a solar energy ecosystem. Fixing and repairing is surely not a cheap process, and could also take weeks if not months. Most people do not have that much time on their hands, and would not want to go through the hassle. Especially when they are living in the same house. So there is an alternative solution for you if getting your roof repaired did not seem like a viable option for you. And that alternative is that you should not install heavy solar panel systems on your roof then, instead you should go for lightweight panels. They would have the same efficiency as heavy panels and will not end up damaging your roof because of their less weight. The best lightweight solar panels you can look into are thin-film solar panels, they weigh a lot less than the other type of solar panels. A lot of homeowners in the US also prefer using them since they are not on the bulky side and just get the job done.

Here are most frequently asked questions.

How much does a 300 watts solar panel weigh?

It really depends on the materials used in the solar panel by the manufacturer. Somewhere from 33 pounds to 50 pounds is where you should be looking at.

Do I need to reinforce my roof for solar panels?

Not necessarily, unless you want to install monocrystalline or polycrystalline solar panels and you have a beat-up roof.

Are solar panels too heavy for roofs?

Monocrystalline and polycrystalline solar panels can sometimes be too heavy for old and weakened roofs, but any roof can easily carry thin-film solar panels.

Can you put solar panels on any roof?

How many solar panels are allowed?

There is no limit as long, as long as you are installing them on your own property.

How many solar panels does it take to run a house?

It completely depends on the number of electrical appliances you want to use in your house.

How many solar panels can I fit on my roof?

Depends on the size of your roof.

Can you install solar panels on a metal roof?

As more and more houses have begun adopting solar energy living, the spaces for installation of solar panels have become a concern. And the best place where most people hedge their eyes for solar panel installation in their houses is the roof for a number of reasons. Firstly, roofs are not that often used and no one even goes to their roof all year long. And installing solar panels on roofs is not obtrusive at all. Also, the roof of a house receives the most sunlight than any other part of a house. All these reasons pose roofs as a really great place for installing solar panels. But, then again, not all roofs can hold heavy solar panels so options like doing reinforcement or going with thin-film solar panels are great on those roofs.