SolarMio > Questions > Why Are Solar Panels So Expensive?

Why Are Solar Panels So Expensive? 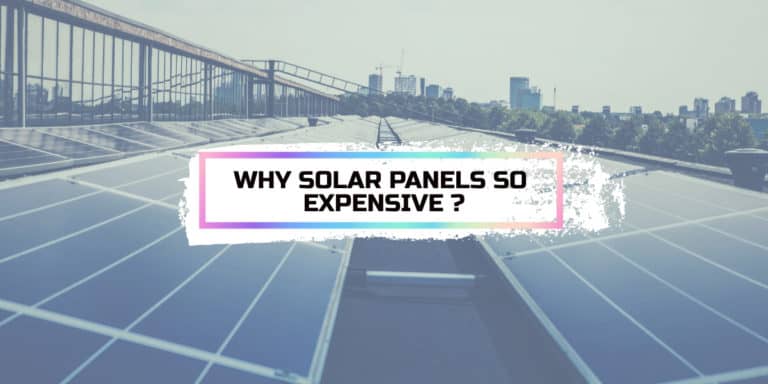 Whenever people think of switching to the off-grid lifestyle and compel themselves to install solar panels in their homes, offices, buildings, etc. Most of them take a step back after looking at the price difference between the installation cost of solar systems and the traditional systems.

These people who get scared away from solar panels just after judging them from their initial cost do not have an idea that these same solar panels which seem to have a hefty price tag in the start actually cost less in the long run.

And there are a couple of reasons why solar panels are more efficient than traditional grid systems. But before I discuss all the long term benefits of installing a solar system. It is essential to first address the fact that why are solar panels so expensive and why their high cost is totally justified.

Reasons why solar panels are expensive to install

The cost of solar panels itself

The first thing you will need to power your home with solar energy is solar panels. And there is getting over the fact that high-quality solar panels cost a boatload of money. However, there are some materials used in solar panels that justify their high cost.

The most critical aspect which makes solar panels expensive is because there is a pretty good amount of highly pure silicon used in them. And a gram of highly purified silicon can cost up to $100 per oz which is absurd.

And if you thought that pure silicon was the most expensive material used in solar panels, then you might be mistaken. Because monocrystalline solar panels; the most efficient form of solar panels actually have really small white diamonds engraved in their solar cells.

Apart from the extremely expensive materials that are used in solar panels. There are some other cost building factors as well. Like the fact that there is some advanced technology involved in the manufacturing process of solar panels and also all the money that goes into the research and development to make the solar panels efficient.

The need for an inverter

You probably would not take this into account about solar systems if you are not in any way related to the technical aspects of solar panels but the inverter plays a really critical role in making sure that the solar energy generated by your solar panels can actually be brought to use and be able to run your electrical appliances.

One extra thing that you might have noticed around solar panels but might have never thought that it is sold separately at a high price point is racking. You must know that solar panels are installed around the house on roofs, walls, etc so that they can be exposed to maximum sunlight. However, installing naked solar panels on roofs and walls would be bizarre as they would fly off with the first blow of wind after their installation and chip off or break into pieces.

To avoid this situation from happening, solar panels sit on racks at roofs and walls, these racks hold the solar panels in one place in every weather condition. And you might be aware of the fact that while these shiny glistening iron racks look gorgeous in sunlight, they do not cost less. So individual racking for each solar panel also adds a fraction of extra cost to the costs of a solar system.

The installation cost of solar panels

Many people who choose to install solar panels in their homes, houses, or offices usually get ticked off by the installation cost of solar panels. And of course, anyone who is thinking about installing a solar system will definitely not be doing the job himself.

As far as the installation cost of a solar system is concerned, it covers about 25 % of the total cost of an installed solar panel system. This installation cost is justified because not every electrician who can work on an electrical grid can become a solar panel installer. There is a proper education that is needed to be eligible for the job and solar panel installers go to a paid diploma school where they learn to do the job professionally. So a professional installer will definitely take a good amount of money for his skill.

Moreover, it takes a lot of time and stages to get a solar system up and running too so the cost is justified there as well.

There is no denying the inevitable fact that some of the money from the costs of solar panels would surely be used for marketing the product.

I understand that from a user's point of view, marketing costs are just baseless. But companies do spend on marketing to showcase their products to potential customers and there is no going around that. So yes, it is definitely hard to justify the marketing costs to an end-user but from a company's perspective, it makes sense.

Aside from all of the above costs that I have quoted above, some other costs affect the total costs of solar systems as well. Like the profit margins of the middle man selling you the solar system, and inspection cost. In some countries, there is also a permission cost, so all of these costs add up to make the total cost of a solar system.

How solar panels save more money despite being expensive

Before you make a hard pass on solar panels after looking at their price breakdown. Here are some reasons that show they are a better long term investment.

The greatest advantage of having a solar system over a grid connection is all the wavier on electricity costs that one enjoys. There is nothing parallel to generating your own electricity.

If we take into account all the years of benefits of not having to pay any bills for electricity. The initial cost of buying and installing solar panels will definitely be much less. Moreover, solar panels can last for decades so just imagine all the electricity costs that you will avoid at that time.

It comes with no surprise that governments offer tax credits to people who use solar panels as this method of generating electricity is really friendly for the environment. In the US, the government offers up to 30% credit in tax to solar panel users. You can just calculate how much money you will save on your taxes annually. It would absolutely wave you off more than what you paid extra for installing solar panels.

Apart from tax benefits, there are some other incentives given to solar panel users by environmentally friendly communities that promote the use of solar panels. Depending on where you live, you can get in contact with these communities and ask for any benefits. However, it is not necessary every community would be providing benefits but still, there is a possibility.

Is it necessary to use a battery with solar panels?

Yes, a battery is necessary to store energy.

Can you install solar panels without racking?

No, it is neither recommended nor practical.

Do you get tax credits for installing solar panels?

Yes, many countries give a tax credit to people who use solar panels.

How long does it take to recover your cost of solar panels?

It can take up to six years to recover your cost but remember that solar panels last for decades.

Yes, they are a great long term investment.

Solar panels have indeed a pretty expensive price tag but there is no shadow of a doubt about the fact that they are a fantastic long-term investment.

All things considered, if we just do a price saving comparison between solar panels and the electrical grid. Over the years, solar panels will save you a boatload of money on electricity bills, and taxes. Therefore, installing them is in fact a really smart decision. And on top of that, by investing in solar panels, you just will not be benefiting your own kind but will also be favoring mother nature as solar panels are friendly to it. So you will do  cost saving that too at a good cause